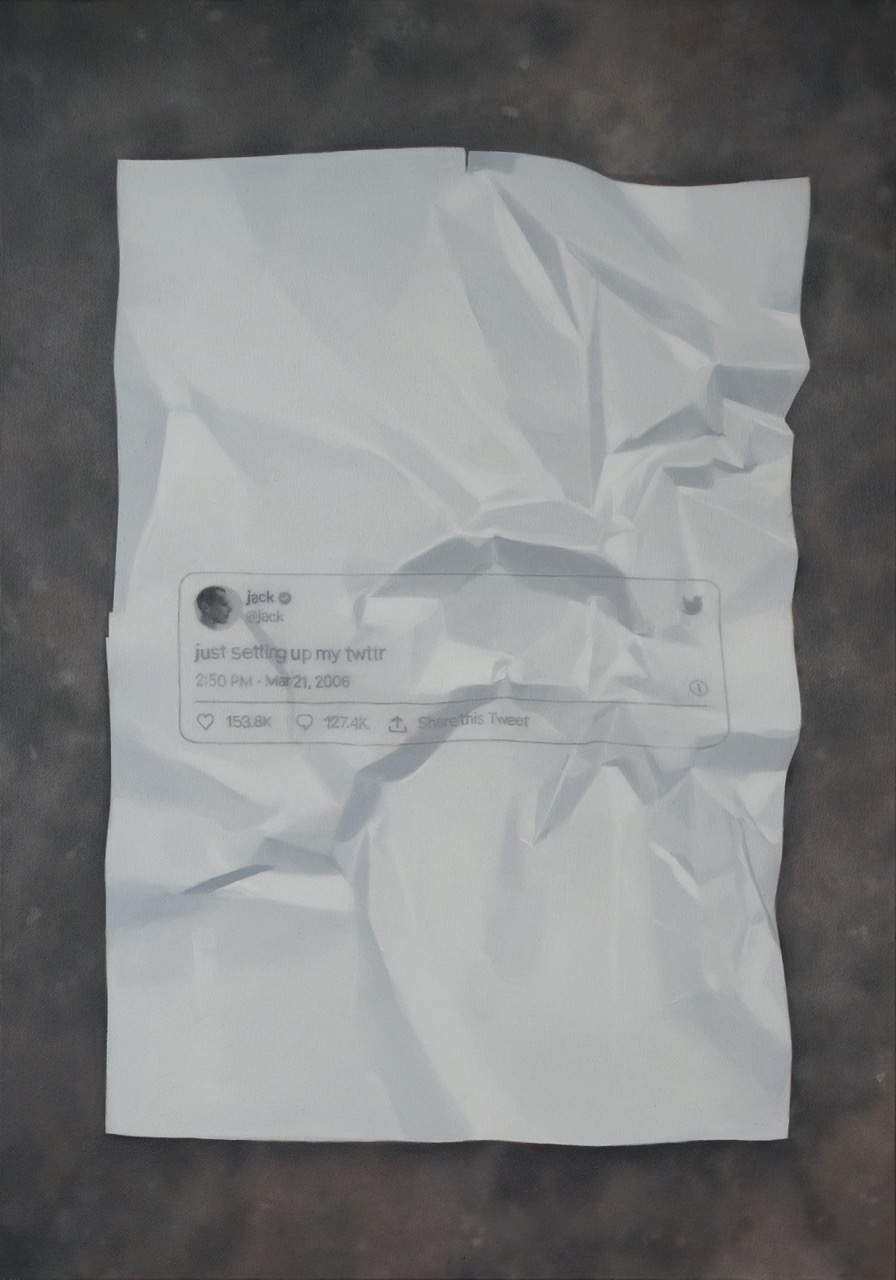 The First Tweet
2022
oil on canvas, 70 × 100 cm
Mass media and social networks create a virtual reality far different from reality. Stjepan Šandrk’s painting intertwines fiction and faction, and the painting The First Tweet represents a series of Fake News paintings, which is focused on the world of media, metaverse and augmented reality, as well as on social networks. The phenomenon of fake news popularized in social networks during the campaign of the previous US President Trump is important for understanding the paintings. The First Tweet partly represents an NFT (Non-Fungible Token) – which cannot be replaced by any other value – and can be anything digital. Furthermore, Jack Dorsey is the originator of the first tweet in which he writes that he is testing the network. Dorsey later minted his tweet – published a tradable token on the blockchain – and sold it for a record price of $2.9 million, and instead of making a profit, he later donated the proceeds. By choosing the NFT phenomenon as the subject of the painting, Šandrk wanted to paint a series of well-known and expensively sold NFTs as a cheap and crumpled printed sheet of paper, taking the opposite position from his colleagues who hurriedly minted physical arts in NFT with the aim of faster sales. The artist’s aspiration was to thematize art as an eternal theme and what it can be, as well as the debatable question of what gives all art its value. Using the platform Twitter, as the scene of the hybrid war and the war for freedom of speech, and NFT, the painting presents the question of the value of the work of art and the relationship between digital and analog.
Laura Kujundžić

Stjepan Šandrk is an academic painter who graduated in 2006 and received his doctorate in 2015 at the Academy of Fine Arts in Zagreb. He is a member of HDLU, HZSU, MENSA artist associations and winner of individual awards. Since 2006, Šandrk has organized several solo exhibitions and participated in more than fifty collective exhibitions. The artist bases his works on contemporary media, pop culture icons and media constructions of reality within the framework of fine art.